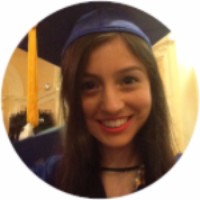 This week’s #TechTeen is Laura Willson, an 18 years old who’s currently studying computer science as a freshman at Hunter College. She started coding at the age of 16, and you can follow her on twitter at @Willson_Laura97.

I thought that coding was something really hard and something that is only for men. My views changed a lot after participating in the Girls Who Code Program. I learned that girls can definitely code too, but unfortunately there is a lack of women coders so it is a necessity to get more women involved.

I have helped developed my skills using Khan Academy as well as Codecademy.

I think other students should learn how to code because it is an important skill to have. We are in the age of technology and it keeps expanding in the blink of an eye, and being able to create a website, app, or video game is something that is truly amazing.

I think starting to code as soon as possible is really important. Also, attending events like hackathons or talks that include people in technology are important to expand your knowledge.

I do see myself building a career in the technology field because it is something that I am passionate about. My dream job is working at Google, but I am not quite sure what I want to do with technology. However, I know for sure that I want to work at Google. I have visited Google’s headquarters in NYC twice and I love that the environment is friendly and casual.

Get involved in programs that will further your skills in coding and technology.