In a few sentence, can you tell us a little about yourself?

Hi! My name is Noah Buscher. I just turned 16 years old and am a sophomore attending Bishop Garrigan High School, a private school in rural Iowa. Though I live in Iowa now, I have moved all over the United States and have met a lot of inspiring people.

My interest in coding began in the summer before 5th grade (I was 11 years old at the time) when I learned about Python and started my coding career.

My interest in coding began after my parents watched a movie about a certain social network. After some research, it seemed that Python was heavily recommended as a language to begin with. So, I began reading anything I could online and off to help me learn more about the language and computer programming as a whole. I made games, built basic utilities, and developed other programs that did not have a particular use but still helped me to hone my skills.

Though Python was a great language to get started in, I soon felt myself being pulled more toward the BASIC variety of languages so I learned Just BASIC and Microsoft’s Small Basic.

Small Basic was okay for building Windows desktop programs in, but it really stopped there for me. I wanted more and began to look for alternatives. While looking for a different cross-platform language I discovered the wealth of Javascript resources and it occurred to me that I could build websites instead of desktop apps. That way more people could use them and because Javascript was (and still is) the de-facto language of the web, there were plenty of tutorials, books, and people willing to help.

I took a full turn and dedicated most of my free time to learning Javascript (in addition to HTML and CSS) which I still use to this day.

Have you created any apps? If so, tell us about it! have created a few apps (web apps, really). The most prominent one is probably Meeet, which is a social network for developers and designer to find each other and work on side projects together.

After talking with designer Cole Townsend, we decided there was a place for such a product and we set off to make it. Building the platform took a few month’s worth of free time, but in the end it was a success with thousands of sign-ups and much support from the community. Unfortunately, we had to sunset the project due to lack of funding for server costs, but we’ll be back up-and-running with a totally new version later this year.

Meeet was built using a MEAN stack, which stands for Mongo, Express, Angular, and Node. This allowed us to use Javascript for both the front-end and back-end, which made development go smoothly.

I have also built the web client for an up-and-coming social network called Chalk using Javascript and Angular, but that’s all I can say about that for now. ;^)

What did you think about tech and coding before you began? How have your views changed?

Before I began coding, I viewed the computer as a bit of a “black-box” where some wizards typed cryptic commands in and made tools and platforms for us laypeople to use. My only experience with code up until that point was accidentally opening Chrome Developer Tools.

My views have changed drastically since then; now I see that it’s not some wizards behind the scenes, but instead average people who know how to speak the computer’s language. And that language is one that can be learned by everyone who wants to.

Currently I do most of my work in Javascript, HTML, and CSS.

Most websites I create use the MEAN stack, which stands for MongoDB, Express, Angular, and Node.

MongoDB is a slick database that I choose to use over MySQL in most cases. Express is a library for Node that makes the process of building a web app go much faster. Angular is a library for Javascript built by Google. Finally, Node is a “Javascript runtime” based on Google’s V8 engine which essentially means it lets you run Javascript without a browser.

Of course, I would love to learn more languages! Personally, Ruby has been on my to-learn list for quite some time now as it seems like a great alternative to Node. 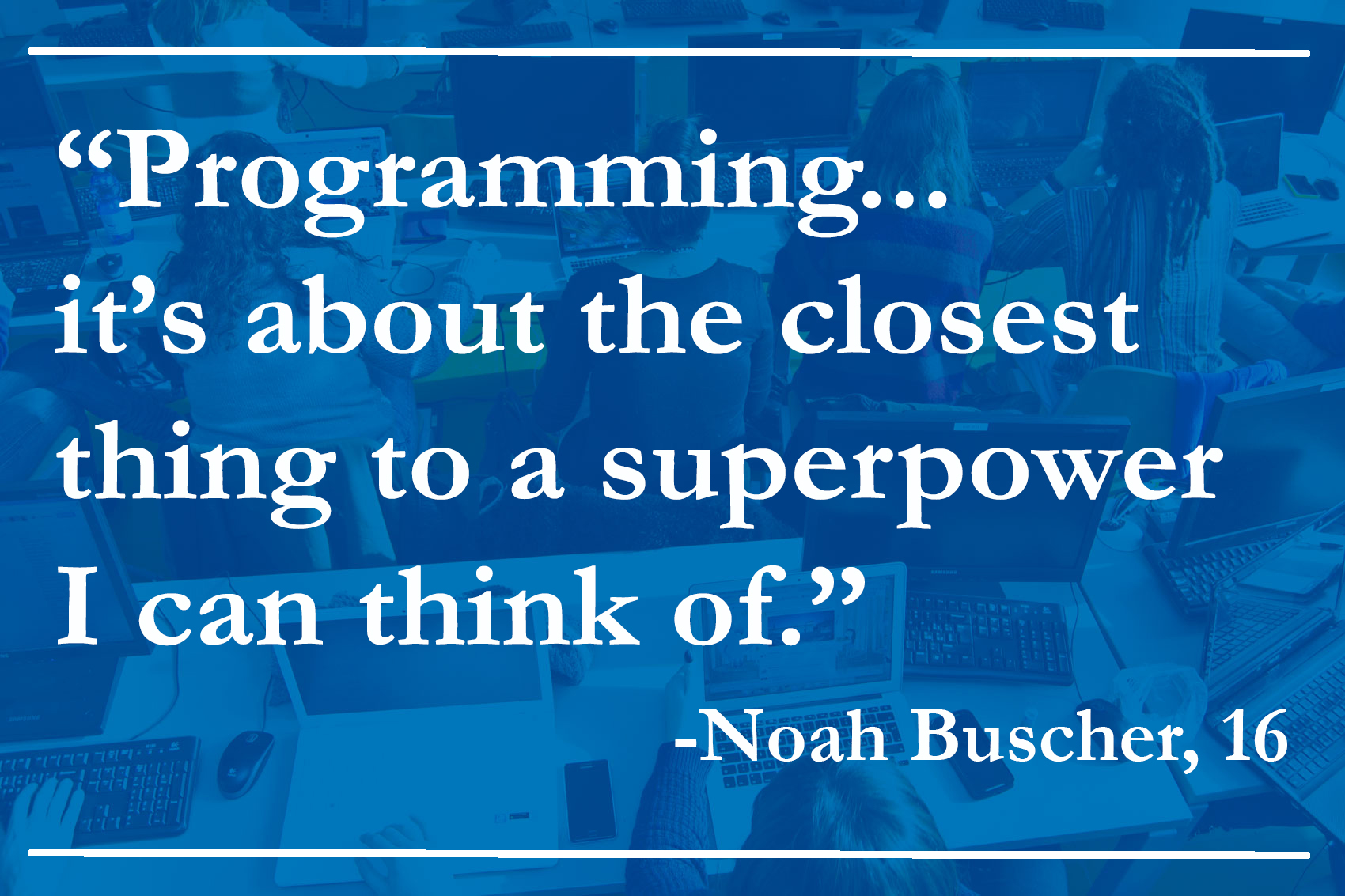 I’m going to be honest: programming has a lot of challenges; the computer is dumb and you have to “teach” it to do everything… even the most basic of tasks. Teaching the computer – programming – can be time consuming and even stressful at times, but when you reach the desired outcome, it’s an amazing feeling to know you accomplished what you set out to do.

Programming also lets me make a larger impact in the world than I would have been able to do otherwise. In fact, it’s about the closest thing to a superpower I can think of.

Are there any resources that have helped you develop your skills? If so, what are they?

There are many resources I have used throughout the years, but the ones I think are the most helpful are Stack Overflow, a Q and A community for developers, MDN (Mozilla Developer Network), a great place to learn about web technologies, and YouTube. The latter was great when I was just starting off and I needed someone to help guide me through a tricky problem.

I think students should learn how to code for many reasons. The first being the massive amount of coding-related jobs and not near enough people to fill them; learning to code now just might mean a job in the future.

The second reason why I think students should learn how to code is because it teaches you to break problems down and think outside the box when you are presented with challenges. Programming also lets you make a product the positively impacts the lives of others while you are still young; it’s an amazing feeling knowing you have made something other people love. Finally, I just think programming is fun!

I would say that you should pick a language and stick with it until you feel comfortable before learning another; if you try to learn too much at once, you may feel overwhelmed and want to throw in the towel.

Don’t be afraid to ask others for help! We all were at the same place as you at one time or another and I can’t think of a single programmer who would not be willing to share their knowledge with others.

I totally see myself building a career in the tech field in the future. Personally, I find space travel and exploration fascinating and would love to land a career at SpaceX as I see their cause as noble and worth working for. Though they are a bit on the large-side for a startup, their atmosphere seems very welcoming and energetic.

Don’t back down in the face of a challenge… get at it with all you’ve got. It’ll be worth it in the end.