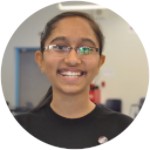 This week, we’re excited to introduce you to #TechTeen Yashwee Kothari. Yashwee is a 15 year old sophomore at Morris County School of Technology in Denville, NJ  in the Computer and Information Sciences Academy. She’s been coding for 2 years and started at the age of 13.

Yashwee is an awardee of the National Center for Women and Technology’s Aspirations in Computing Award. She’s the co-Founder and director of hackMCST, the first hackathon to take place at her school. She’s currently working on starting a national program called CodeLeaders with the nonprofit EverybodyCodeNow! CodeLeaders aspires to increase participation in computer science by empowering middle school students with the programming and problem skills.

I became involved with coding and technology after completing a Robotics elective at my middle school. I began with drag and drop programming and eventually found my passion in writing code. From there, I began learning the basics of JavaScript. I became comfortable with my programming skills once I started my high school career at Morris County School of Technology. That is where I began programming in Java.

Before I began to code, I thought it was confusing and something that I would never be able to do. I never understood the importance of tech and coding before I decided to give it a shot. Ever since I took the robotics elective, I have enjoyed every bit and developed an everlasting passion for coding.

To be successful in tech I believe that you just have to give it a shot and try your best!

I am familiar with Java,  HTML, CSS, and a little bit of Android App Development. I am currently learning Swift and IOS development. I would definitely like to learn more programming languages in the future and advance in the languages I am already familiar with. I would really like to learn Python and PHP. With these languages, I can add many neat feature to my current websites!

Seeing the final product is the best part. It is the best feeling to feel accomplished! Yes, programming will be hard at first. However, once you make it past that phase it gets much better and starts being fun.

I began my programming career using CodeAcademy, and online tutorials from Programming Basics.

CAC Note: Programming  Basics has tutorials in the following languages:

I strongly believe that students should learn how to code because it’s something that is very useful in today’s age. I see coding as a way of thinking and solving problems critically. Before I write that first line of code in any program, there is so much more that goes behind it.

Programming is about critical thinking and real-world problem solving. We use technology for almost everything in our day to day lives. Coding is something that will empower today’s students and prepare them with essential skills for the future.

Don’t be afraid to learn programming and try writing your first line of code. I was always intimidated when I saw my dad writing code. It seemed so hard! Then I began learning and I realized it was not like that! So when you have some go online, check out some programming tutorials and give it a try.

If you are a high school student, definitely find hackathons near you to attend. So far I have been to 3 hackathons: HackBCA, HackRU, and PennApps XII and hope to go to many more. Through the hackathons, I have met so many new students like me and have learned about other opportunities that help me advance in my programming career.

Yes! I see myself building a career in the vast tech field. Programming is something I’ve developed a strong passion for and plan to use it in my future career. I hope to attend my dream college Caltech and intern with Facebook one day.

Attend lots and lots of hackathons and meet more students who are interested in coding – I learned the most by making new friends and going to hackathons. Most importantly, just give it a try!